Just to back up a bit of what I said below.

These statistics come from the yearly 2006 and 2007 'selected issues' reports from the IMF on Korea, available at their online archive here. 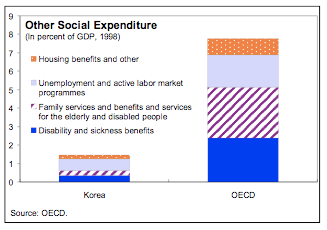 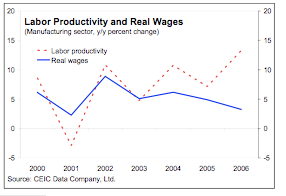 Wish this graphed the divergence between labour productivity and real wages back further (say to 1990) so one could grasp the larger trend. The dip in 2001 was probably from the credit crisis and a bit of a hangover from the 1997 crisis. At any rate, post-2002 it is clear that incomes are not rising with increased productivity. 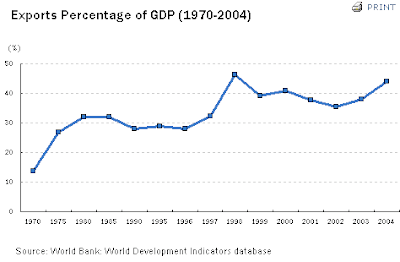 I believe this figure (from SERI) is higher now, anyways, that exports and inequality seem to be going up together is certainly a indicator that not much is trickling down. 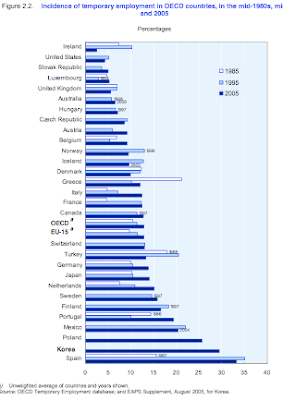 This last one is from a 2007 OECD report on labour market duality in Korea, it uses one of the more conservative measures of levels of irregular work (it does not include regular workers who are not paid bonuses and overtime which would make the 2005 figure approx 47%) but it still looks damning in comparision nonetheless. 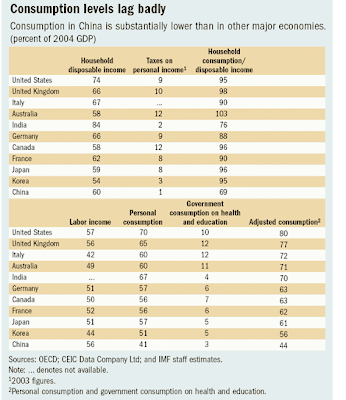 The figure to look for here is adjusted consumption figure for Korea. The point here is that domestic consumption as % of GDP lags, link.
at 12:25 PM