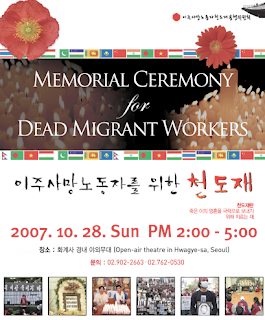 Yonhap news has just reported on the increasing number of injuries to migrant workers in Korea:

The number of foreign laborers injured at their workplaces has grown rapidly here during the past years due to a lack of proper safety education and preventative measures, despite a growing number of foreigners coming to South Korea to seek mostly low-paid manual jobs.

More than 8,600 foreign workers were injured at their workplaces here during the past three years, according to a report submitted Friday by Rep. Shin Ki-nam of the pro-government United New Democratic Party to a parliamentary inspection session.

The number of foreigners, including illegal aliens, surpassed one million as of the end of September, according to government statistics, as a large number of Chinese and primarily southeast Asian nationals flock to South Korea to fill shortages in mostly labor-intensive industries.

At the same time, the MTU and other migrant organizations have held a ceremony to commemorate those lost during industrial accidents, immigration crackdowns, and otherwise. The Hankyoreh included a short blurb about it:

Buddhist groups and migrant workers attend “Cheondojae,” a Buddhist memorial service in which mourners pay homage to the dead, at Hwagyesa Temple, which is located in the northern part of Seoul, on October 28.

Cheondojae is carried out as a way to bring peace and eternal rest to those who have died. Yesterday’s ceremony was held in honor of foreign workers who have died as a result of accidents that occurred in the difficult, dirty and dangerous industries in which most of the migrant workers in South Korea are employed. The ceremony was attended by Buddhist priests and migrant workers from Nepal, the Philippines, Sri Lanka and other Southeast Asian countries.

The organizers of the service estimate that approximately 3,000 migrant workers have died in South Korea. At the ceremony, a memorial tablet inscribed with the names of 1,037 people who were able to be identified was placed on the altar.