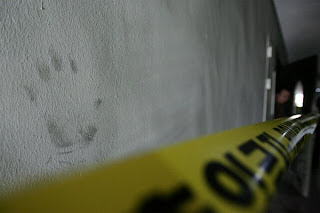 Handprint on the wall (Chosun Ilbo)

Regarding the tragic fire that occurred yesterday morning in Yeosu, the Korea Times tells us that

A predawn fire at an immigration detention center in South Cholla Province on Sunday killed nine foreigners and injured 18 others, police said.[...]The deceased were eight Chinese nationals and one Uzbek. The death toll is expected to rise as some of the injured are in critical condition.

The fire started at around 4 a.m. and most of the victims are believed to have suffocated from the fumes. About 55 foreigners were detained in the facility, including 42 Chinese, four Uzbeks, two from Kazakhstan and Sri Lanka, and one each from Russia, Kyrgyzstan, India, Vietnam and Iran.

The Joongang Ilbo adds that the fire broke out

on the third floor of the center, which housed male detainees. The fourth floor was a detention area for women. The nine guards on duty at the time attempted to fight the fire with extinguishers, but were reportedly unable to find the keys to the steel-barred room where the fire broke out. It was extinguished by more than 100 firefighters in about an hour, after it had spread to two other rooms on the same floor. 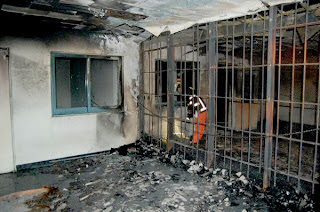 I take it these are the keys the article is referring to? At any rate, the Times says that the firefighters

failed to put out the fire early because each detention room was blocked with iron bars to prevent detainees from fleeing. It is believed that the high number of deaths was due in large part to the detention center's floors, a fireman said. The floors, which were said to have contained urethane, emitted toxic gases when on fire.

Yonhap, via the Hankyoreh tells us that

An investigation is underway to determine the exact cause of the fire, but detention center officials said a short circuit from a television set on the third floor is believed to be the cause of the blaze.

Police are also looking at the possibility of arson, as closed circuit television (CCTV) footage shows a foreign detainee covering a CCTV camera on the floor with wet toilet paper just before the fire broke out.

For most news sources, the arson possiblility seems to be the one being trumpeted as most likely (No cut news even put 'possible arson' in an article's title).

The Joongang Ilbo adds some pertinent information regarding what may have helped the progress of the fire:

Fire officials said yesterday that the building had passed a fire safety inspection in December, although it had no sprinkler system installed; under Korea’s fire safety regulations, those systems are required only for buildings more than 11 stories tall, regardless of their use.

So we're left thinking that the building, pictured here, must have been built back before such modern fire prevention equipment was standard in such buildings. Well, no, it was built in 2005. Are we seriously being told that there aren't slightly different regulations for buildings that have iron bars caging the dozens of people who spend their days and nights there? Let's review the numbers: Nine dead (well, ten now, it seems) and 18 injured (some of whom may yet die), out of 55 inmates. That's 27 injured or dead and 28 uninjured. Stunning odds. 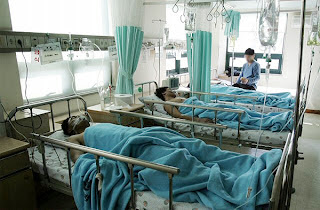 Worth mentioning, according to the Times, is that

Civic groups have criticized the government for their lukewarm efforts in protecting the rights of detained foreigners. Last year the immigration center was criticized for housing 18 foreigners in a room designed to accommodate only 10.

The Korea Herald adds that

The immigration office also received a warning from the National Human Rights Commission of Korea in 2005 for maltreatment of detained immigrants. Foreigners had made an official complaint to the human rights watchdog, claiming that they were being treated like "pigs in cages" in the overcrowded and unhygienic rooms, with poor meals and limited space.

But a Justice Ministry official said due to a tight budget and a sudden influx of illegal foreigners, the government has been unable to expand facilities for housing those detained.

A sudden influx of illegal foreigners? Whose fault is that, Justice Ministry official? Remember that month when the number of drivers charged with failing to stop behind the crosswalk suddenly increased drastically? Ah, yes, that was the month of your crackdown on that practice. Any sudden influx of illegal foreigners into your detainment centers is due to the Justice Ministry deciding to hunt down and arrest masses of those foreigners. Over the years there have been periodic crackdowns on illegal migrant workers (especially prior to the implementation of the Employment Permit System in 2003-2004), while the reaction to the 'English Spectrum' incident in early 2005 led to an increase in arrests of English teachers without visas (though the number of those arrests pale in comparison to those of migrant workers). Any massive increase in the number of foreigners in detainment centers due to immigration violations has always been due to the Justice Ministry's decision to periodically arrest large numbers of people, so such an excuse for poor detainment conditions is pathetic. Other structural reasons as to why there is such a large pool of illegal foreign workers are mentioned in the Migrant Trade Union's reaction to the Yeosu fire.

One of the first documents I thought of when I read about the fire in Yeosu was one that predicted the deaths that occurred yesterday: the prison diary of an English teacher held in Yeosu's immigration detainment center that was published by Ohmynews (part 1, part 2) back in May of 2005. The writer notes other reasons for there being so many people behind bars there, related to the government's policy of doing nothing to help arrested migrant workers get their paychecks so they can return home, resulting in long stays for those left in limbo for months. On top of that, the Korean government only pays for deportation airfare when a prisoner harms him or herself. The possibility exists that, if arson was involved, the arsonist wasn't trying to escape.

Regarding the toxic gas emitting urethane floors, the writer of the prison diary tells us that "The floor is covered by giant 1x1 meter foam rubber jigsaw puzzle tiles." He also describes the neglect of detainees' medical needs:

Once, when I asked a guard for something to put on a wound I had on my hand, I was told that because it was late, nothing was available. The medical staff had gone home for the day. I asked him if there was an emergency medical box -- he said no.

No emergency medical kit in a detainment center? He says more regarding the staff:

I have been told on more than one occasion that this facility is understaffed and under funded. There are not enough staff, guards or otherwise to safely run this prison. Which, in my view, cannot be lawful, let alone safe for staff or detainee. When a repairman comes to fix the phone or TV, he is locked inside with us. This is only because the guards trust us not to harm that person. (This is also the case whenever one of the staff enter our cells.) [...] The shortage of staff to run this facility is a danger, especially at night when there are less staff on duty.

This is all illustrated in this story, which foreshadows the events of Sunday morning:

Last night (April 22 [2005]), there was a fire (I believe in cell 201). It happened around 3:30 a.m. I learned later that is was probably started by three Russian men (who are now in solitary confinement). Before this fire occurred I could hear people shouting downstairs, complaining and demanding that the TVs be restored. (I'm not sure if the people who started the fire were among their number.)

Luckily, the fire was contained. But what if it wasn't? Everyone, behind bars, have no ability to escape to safety. During the fire, the guards on our floor seems to be at a loss as to what to do (or rather, they were waiting to be told what to do.) One guard, if my memory is accurate, sat down at the office computer and played solitaire.

Truth be told, if any detainee had a mind to harm him/herself or another detainee, cause damage to any of the fixtures or objects inside the cells, or start a fire, then it is not impossible. We are not supposed to have lighters or matches, yet a fire was started. How?

The picture of Yeosu's detention center that the writer paints is one unfair for all sides, of detainees left in limbo for months and staff on 24 hour shifts unequipped to provide help to detainees. Yet we're told by Yonhap that

Prime Minister Han Myeong-sook ordered a thorough probe into the case after expressing regret over the deaths of the foreigners, her office said. "Han instructed Justice Minister Kim Sung-ho to examine detention centers for illegal foreign workers and work out measures to prevent the recurrence of similar incidents."

Ah yes, a post-tragedy government probe to see how the preventable tragedy could have been prevented. It gets better though, according to the Times, which tells us that

So the choices are to collectively punish the survivors and victims' families for the actions of one possible arsonist, or place the blame on the overworked staff. Let me get this straight: a government agency decided that sprinklers weren't necessary in a detention facility, one which they've been warned by the Human Rights Commission is too crowded, one which is understaffed by people on 24 hour shifts, where fires have happened in the past, and where people are given a plane ticket home if they harm themselves, but the choices are to blame the victims or lower level employees while "work[ing] out measures to prevent the recurrence of similar incidents"? A lot could be said to criticize the structural reasons for there being so many illegal workers in Korea, but in the case of the deaths caused by this fire in a government detainment facility, there are very specific policies and regulations that should have already been in place, and the lack of these, along with a good dose of negligence, led to yesterday's tragedy. For these problems to be addressed, (or even acknowledged) was this really needed? 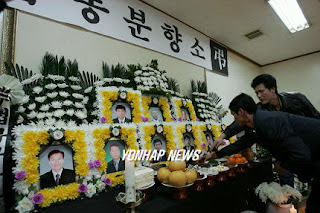 (Crossposted at Gusts of Popular Feeling)
at 1:11 PM