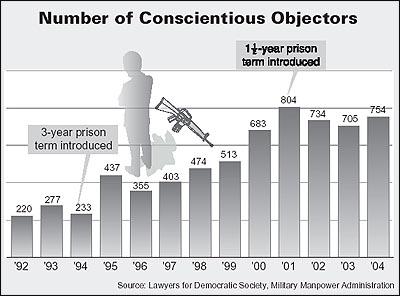 Early in 2001 the concept of “objection to military service” became known to the Korean public when a current affairs magazine reported on a forum concerning the military service system. It focussed on the history of conscientious objection among Jehovah's Witnesses in Korea; since the formation of the Korean army, over 10,000 objectors (mostly Jehovah's Witnesses) have been imprisoned for their beliefs.

The report and forum began to draw people's attention to the previously taboo subject of conscientious objection, but also drew the attention of the Seoul Police, who started to investigate three antimilitarist websites which provided information on evading military service.

In December 2001, a pacifist and Buddhist, Oh Tae-yang, declared his objection to military service. The following February, for the first time in any conscientious objection case in South Korea, a court decided that he would be not imprisoned while awaiting trial. On June 2002 his trial was adjourned until after the decision of the Constitutional Court, but the case was reopened on 17 May 2004. On 30 August 2004 he was sentenced to 1 year and 6 months imprisonment, and arrested in court.

The reason that Oh Tae-yang's case took so long to go through the court system was that, due to the fact that he was not a Jehovah's Witness, he turned conscientious objection into a political stance as opposed to an expression of religious belief, which started the small but growing movement in Korea which has led in the past year to Supreme court decisions regarding its legality.

Anyone interested to learn more about the first two years of the movement (2001-2002) can find several articles in an archive on a Quaker website.

In February 2002, Korea Solidarity for Conscientious Objection was launched. It is now a coalition of 36 civil and social organisations.

March 2003 an international conference on conscientious objection to military service took place in Seoul, attracting more than 400 participants over two days. It was reported on here and here.

As a small handful of people began to declare conscientious objection, (a list of whom can be found here - scroll down), on November 21, 2003, Kang Cheol-min went a step further. At the end of his first leave, four months after beginning his military service, he held a press conference and declared his conscientious objection in protest against the deployment of Korean troops to Iraq.

He did so knowing that he could face a stiff punishment, for those who refuse to comply with conscription are tried by civil courts, which since 2001 have handed down sentences of up to 18 months of imprisonment for violating the Military Service Law. Those who refuse to participate in military training after being conscripted, however, are tried in a military criminal court for mutiny.

On the day of his press conference, he began a sit-in in the National Council of Churches in Seoul. A week later, after a second press conference, and during a march to the residence of the President of Korea, he was arrested. A court martial sentenced him to 2 years imprisonment on December 27, 2003, but the High Military Court reduced his sentence to 1 1/2 years in prison the following March. He went on hunger strike for 7 days on 22 June 2004, to protest against the dispatch of Korean troops to Iraq.

Early 2004 saw a report by Amnesty International about an objector who refused to perform his military service on grounds of discrimination against gay, bisexual and transsexual persons by the military, as well as a Korea Times article about a teacher who declared CO.

As the Chosun Ilbo and Korea Times reported, a Seoul court dropped a legal bombshell on May 21, 2004 when judge Lee Jeong-ryeol acquitted three Jehovah's Witnesses, upholding their religious conscience over compulsory military service. The Military Manpower Administration quickly announced that it did not acknowledge the right of refusal to serve in the military, while a week later the Chosun Ilbo bemoaned the inconsistency among the courts in dealing with the issue.

This inconsistency was resolved on July 15, when the Supreme Court upheld the decision of a lower court to prosecute a Jehovah's Witness for evading conscription, as reported by the Chosun Ilbo, Korea Times, and Joongang Ilbo. The court said in its ruling, “If national security is not protected because of the failure to serve the mandatory military service, the dignity and value of human beings cannot be guaranteed. One’s freedom of conscience does not take precedence over the obligation of national defense.” Despite this, one justice disagreed, and five others felt alternative service was necessary for conscientious objectors, something the Joongang Ilbo argued for in an editorial that day.

The Joongang Ilbo also posted an excellent article a few days later about Jehovah's Witnesses titled "Pacifists and Model Prisoners", while objectors were reported a few weeks later calling for alternative service. In October two objectors, Choi Myung-jin, 23, and Yoon Yeo-beom, 25, whose prison terms were upheld by the Supreme Court decision on July 15, announced they would take their case to the U.N. Human Rights Committee, though comments made by their lawyer calling for an alternative system of service suggest this may have been done to put pressure on the government. At any rate, it was reported in March this year that a revision bill, submitted by a ruling party lawmaker, "aimed at allowing conscientious objectors an alternative to military service, mainly at social welfare facilities, for one and a half times longer than ordinary ones who serve in the military."

While this would seem to be good news, the Korea Herald reported two weeks ago that a judge "sentenced a conscientious objector to one and a half years in prison, reversing a previous decision that upheld his right not to serve in the military for religious reasons." This of course refers to the May 21 decision of last year; apparently, that decision only gave him a one year reprieve.

The article continues, however:

Amid the uproar, on July 2, the National Human Rights Commission of Korea said it will hold a public hearing on the issue of conscientious objectors around the end of August. Experts have said it will put an end to the case-by-case rulings and establish a consistent policy on the issue.

The NHRC has collected documents and data on conscientious objectors since 2003, but it will be the first time for it to hold a hearing on the issue. It would request an official opinion of the Military Manpower Administration beforehand and present the hearing's result to the whole committee of the National Assembly, according to sources.

While there does seem to be more and more people agreeing that alternative service should be allowed, how exactly this will be carried out is the more pressing question. The process for determining whether someone is genuinely a conscientious objector or whether they simply don't want to have to do military service is going to be a contentious subject of debate. In the end, I do wonder if only Jehovah's Witnesses will be allowed to. When one considers that hundreds of Korean families give birth to children overseas every year so as to give them foreign citizenship in order to avoid military service, the abuse of an alternative service system isn't a possibility, but a certainty. What's also certain is that watching how different groups within the Korean government, parliament, and civil society go about negotiating a process for conscientious objectors to enter a space outside of the military and prison will be interesting - almost as interesting as the realization that five years ago this was an utterly taboo topic.

Here is a list of Korean conscientious objectors who were in prison as of the end of 2004.
at 8:54 AM